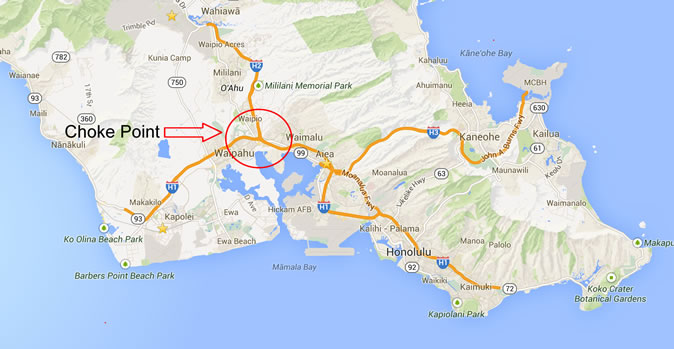 Before moving to Hawaii I heard about two problems: the traffic and the schools. Well I’m here on the island and I’m going to tell you the ground truth. Yes, O’ahu has bad traffic during certain times of day, in certain areas. But it’s not all bad!

Why O’ahu Has Bad Traffic

All of the affordable housing on O’ahu is near Ewa Beach, Mililani, and Kapolei, which are on the west side and central part of the island. But most of the jobs are near Pearl Harbor, Hickam AFB, and Honolulu. 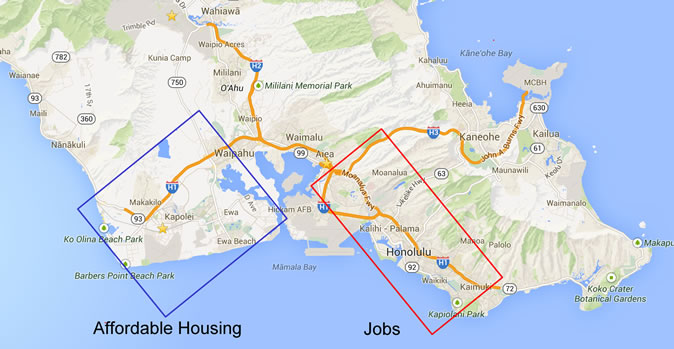 Every morning commuters travel from the affordable housing to their jobs, and back home in the evening. The choke point for this traffic is the H-1 and H-2 merge.

There is little room for accidents or breakdowns on Hawaii’s freeways. So a simple flat tire involving a tow track can slow traffic significantly. Since that car takes up an open lane, all the cars have to merge over to get around the stuck vehicle.

Is it always bad?

Here’s the good news. Traffic in Hawaii is packed during the morning and evening commutes, but is very clear the rest of the time.

So if you live in Ewa Beach and need to pick up a friend from the airport at 9Am, you will have an easy drive. Likewise, driving on the weekend is fast and convenient to most parts of the island.

The bad traffic is mostly confined to H-1 and the portion of H-2 flowing into H-1.

Choosing a Home Based on Traffic

You only need to be concerned about the traffic if you’re considering living in the following areas:

If you’re stationed at Schofield Barracks or MCB Kaneohe, you’re lucky. Schofield has some great housing near by (Mililani), that is very close to base. MCB Kaneohe has expensive housing nearby, but we’ll save that for another article – this is about traffic, and I don’t think folks at MCB Kaneohe are stuck in traffic very often.

This commute is known as the worst on the island. It’s bittersweet because this is where all the beautiful, affordable homes are! It’s a tough drive. Whether it is worth it is up to you.

If you want to beat the traffic for this commute you have to get up early! The traffic pattern works like this:

Commute from Mililani to Hickam/Pearl Harbor

This commute is slightly better than coming from Ewa Beach. The merge onto H-1 will slow you down, adding 20 or more minutes to your commute time between 6-7:30AM.

Commute from Kaneohe to Hickam/Pearl Harbor

Due to the construction of the H-3 freeway, the commute from Kaneohe or Kailua to the other side of the island is a breeze.

You can expect this drive to take around 35 minutes. It’s a better drive than Ewa Beach because there is rarely any traffic. The only traffic I’ve ever heard of is the tunnel getting blocked due to an accident. Besides that, it’s smooth sailing.

Oh, and the scenery along this raised freeway is amazing! 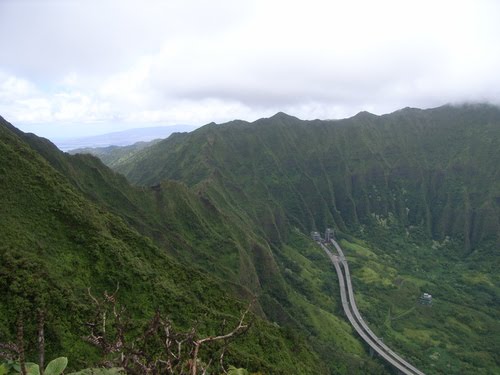 There is no easy way to get in and out of Waikiki, so expect it to take an hour to get there from most locations on the island. But there are no military bases in this area, so going to Waikiki is more of a splurge.

How to Decrease your Commute Time

Hawaii has a “zip lane” that is open in the morning from 5-8:30AM. They allow cars with 3 or more passengers, motorcycles, and buses. A giant truck moves blocks into the west-bound lane, taking one of the lanes to make H-1E wider.

For most military it’s not that useful because it’s tricky to organize three people to leave and come home at the same time every day. But if you drive a motorcycle it’s a slick way to bypass the traffic and get to Hickam or Pearl Harbor or the other bases in that area.

If you can organize a few folks, DoD has a great program that gives you a free van with gas to use as a commute car.

I got a speeding ticket during my first week on the island. The top speed limit on the island is 65mph. But most areas on H-1 are 55.

The police like to hide on curves or on the incline of a hill. They park their motorcycle and stand near it with a radar gun. The first time you see this you will think a motorcyclist is pulled over on the road! The police are out checking for speeders often.

The police seem unforgiving and wrote me a ticket for the exact speed I was over. In addition, I forgot to put my insurance card in my glove compartment after I picked it up from the shipping company. So I got a ticket for that as well!

Friendliest Drivers in the US?

You may find crowded traffic in Hawaii, but what you won’t find is rude drivers or hostility. You rarely hear a car horn on the island. I used it once when the driver in front of me failed to move at a green light. Everybody looked at me like I was an asshole!

Hawaiians are friendly when dealing with merging traffic, and usually take turns letting people in rather than blocking cars in a merging lane. You’ll often see the “shaka” sign when you let someone in your lane, as a thank you.